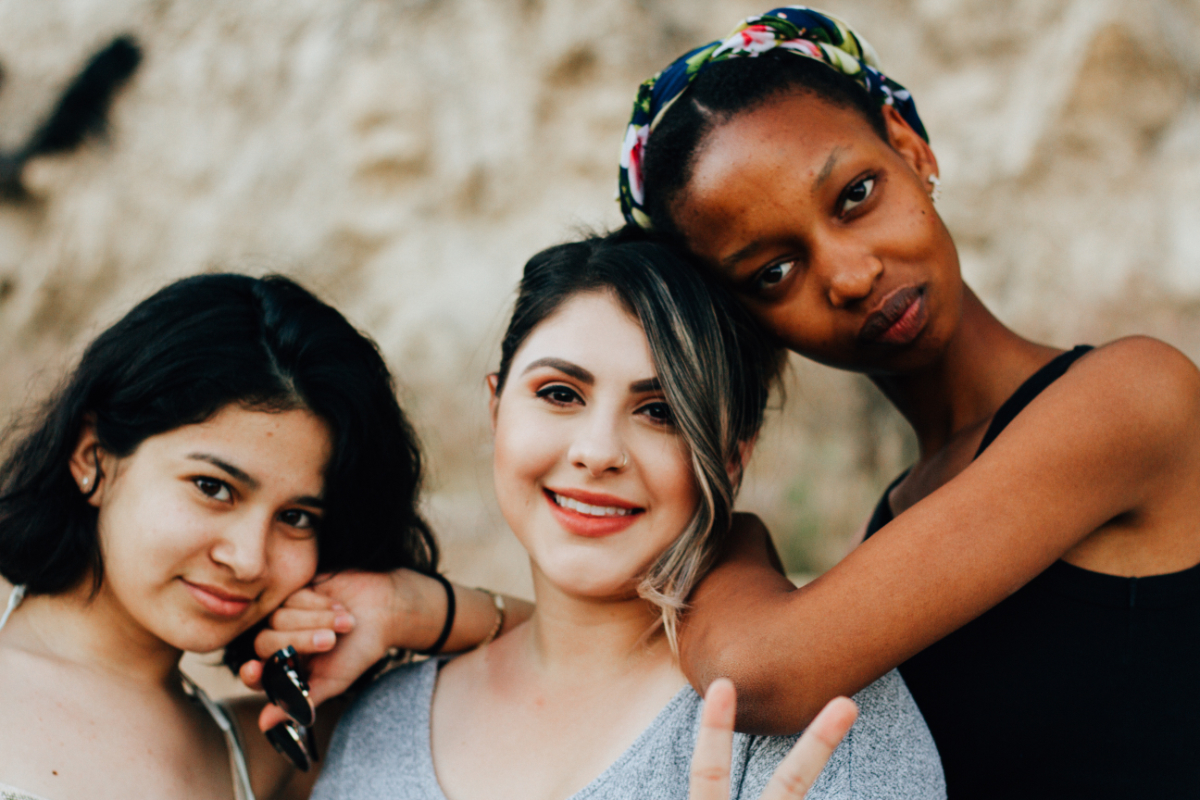 White women: it’s time to start being allies, and stop being thieves.

That may sound harsh, but so is the appropriation we’re profiting from. Our sisters of color deserve better than this, and it’s up to us to do better, be better, and hold each other accountable – all the more so if we’re claiming the mantle of being spiritual, conscious or progressive.

This morning a friend sent me a message with an Instagram post that made my heart go THUNK. 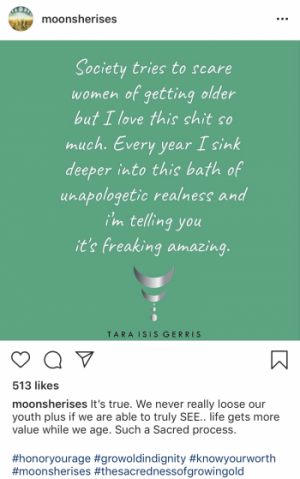 I’m sure the friend who sent it to me had no idea that I would find it controversial. I mean, the sentiment of this post is just gorgeous and I couldn’t agree with it more, but frankly I liked it better the way Bunmi Laditan said it on Twitter in 2018, which is why when I saw the same message last year, I shared it with her name attached: 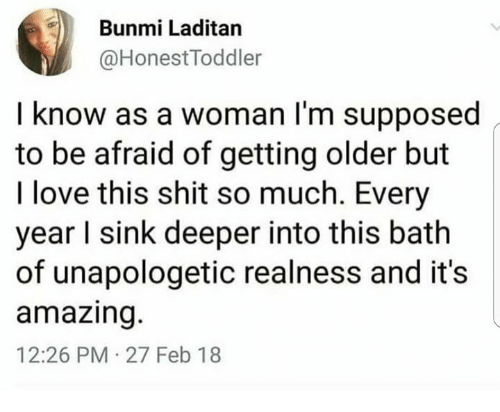 Granted, there are sentiments moving through the collective unconscious that are bound to be voiced and shared by more than one person, each unknowing that the other said nearly the same thing.

But Bunmi Laditan is a talented author with a signature style, and even though it’s been nearly a year and a half since I read and shared her original post, I recognized her voice almost immediately.

So who was this woman that copy-pasted Bunmi Laditan’s words, changed them up a bit (definitely for the worse), and put her own name at the bottom of the quote?

Her name is Tara Isis Gerris, and you’ve probably never heard of her – but if you’re a social media ‘boss babe’ and you’re even a little bit crunchy, then you’ve almost certainly heard of her brand, the Wild Woman Sisterhood.

Cruise around on the Wild Woman website and social media properties, and you’ll be served a word salad of nearly every spiritual catchphrase imaginable – conscious, sacred, awakened, authentic, profound, wisdom, and of course sisterhood.

Although I really couldn’t imagine how a person could be both ‘conscious’ and lifting entire sentences from another woman without giving her credit, I wanted to find a way to call out this plagiarism while also leaving space for Ms. Gerris to acknowledge the mistake and correct it – which is why I left comments on her Instagram and Facebook posts in the form of a question rather than an accusation. 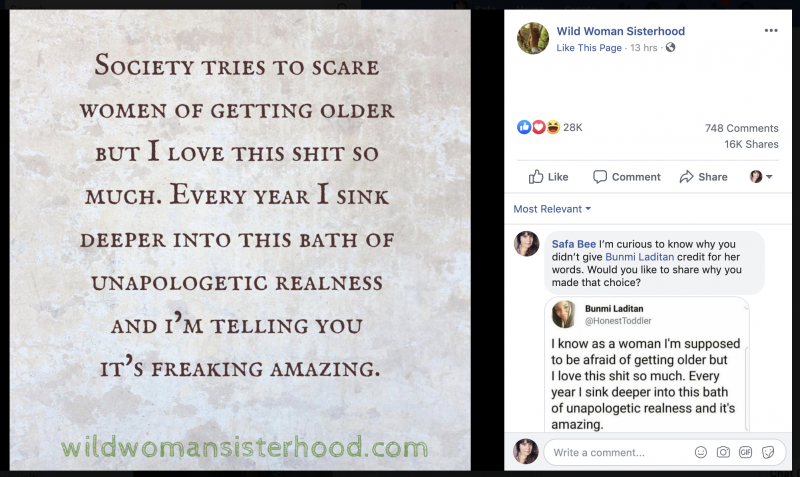 Even if you could convince me that this morning Ms. Gerris did not knowingly steal the words of a black woman, by noon she was not only aware of her actions but she did it again, and the second time you cannot tell me it was not deliberate!

Here is the second post she made of the same quote, still with no attribution to the original author: 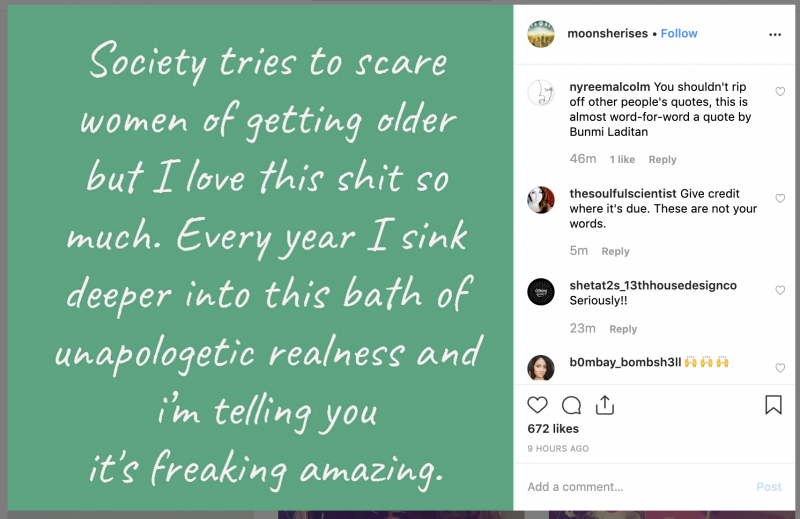 Why? Why? What is the point of stealing when attribution is so easy?

Considering the quote in question is about ‘unapologetic realness’ and the woman who deliberately plagiarized it claims to promote consciousness, leadership, and sisterhood, the irony here is thick.

But my point in writing this post is not just to drag a specific woman through the mud – it’s to say that even though we may not behave as blatantly as Ms. Gerris and her social media faux pas, white women (yes, even the spiritual and progressive ones) have a long-standing and terrible habit of lifting intellectual property from women of color, and then turning a profit from what they’ve taken (even if the profit is social currency).

I think we’re all familiar with the problems such as decontextualizing yoga from Ayurveda and treating it like an exercise routine, or commodifying feather headdresses and dream catchers, or bindis and ‘belly dance’ outfits into fashion accessories you can pick up at the mall.

I’m not saying I have a perfect roadmap to avoiding the pitfalls of white appropriation, but I do know as an intersectional feminist I frequently raise questions with myself such as:

How do I use photographic imagery on the websites I make in such a way that promotes diversity of representation, without using images of people of color to promote or ‘sell’ a business or an organization where they do not, in actual practice, have access to leadership or full participation?

Am I using my own authentic vernacular when I speak and write? When does a ‘turn of phrase’ belong to the specific cultural subgroup who coined it, and when can we consider a word or phrase to be fairly be adopted and diffused into the general evolution of language?

How do I curate music or art I personally enjoy, and use that curation to express my taste without leveraging the creativity of people of color to increase my personal social capital?

How do I travel to – and host business retreats in – locations predominantly populated by communities of color, and do so in a way that respects and benefits local people instead of exploiting them?

And the question I wrestle with the most, how do I authentically stand in my identity as a Sufi practitioner and teacher, and incorporate into my mentoring the wisdom my Guide not only transmitted to me but implored me to share, without cynically capitalizing on an ancient spiritual technology or positioning myself as an expert on subjects about which I am most certainly a novice?

This is by no means an exhaustive list, but a few guidelines that help me distinguish between appropriation and cultural diffusion include:

Waiting to be invited into an experience or a tradition by original practitioners
Approaching situations and locations with humility and curiosity that respects boundaries
Practicing the fine art of being quiet, especially in new environments
Presenting ideas and wisdom holistically and in the proper context
Doing a legitimate amount of research and practice (i.e. years of study, not weeks) before teaching
And of course, giving attribution to the original source of any wisdom and ideas

Another point that’s crucial for white women, especially in leadership positions, is to use our voices and platforms to give a signal boost to the women of color who are already sharing wisdom and speaking their truth (i.e. we don’t need to ‘give them a voice’ as so many white institutions mistakenly say).

Women, in general, are so often talked over, doubted, spoken for, or have our ideas stolen from us, that it seems like a crime on top of a crime when one woman does it to another woman.

What insecurity must a woman like Tara Isis Gerris feel, to decide she needed to take credit for a phrase instead of just saying, “Check out this quote from Bunmi Laditan. She really nailed it!”

It may seem counterintuitive, but if white women want to be allies to women of color, then some of the strongest leadership moves we can make are to sit down, quiet down, and share the stage.