Carrie Crawford Smith was born in Tennessee in 1877. Although the details of her childhood have been lost to history, we do know that she attended a historically black college – Fisk University.

In 1918, she moved to Evanston, Illinois, at a time in American history called “The Great Migration”, when millions of African-Americans left their rural communities in the South and resettled in cities across the Northeast and Midwest in search of better economic prospects. 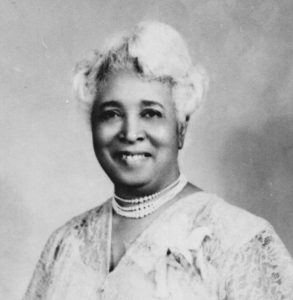 In the context of this historical period, Carrie Crawford Smith saw both a need and an opportunity. She founded an employment agency, and the majority of her business focused on matching newly-arrived African-Americans in search of work with wealthy families in search of domestic help.

She saw this not only an opportunity to build a successful business for herself, but also a chance to help people settle in a new place, and – perhaps most importantly – to stand up for dignified and respectful positions for African-Americans in the homes where they found work. By extension, she hoped that this would lead to a more respected position for African-Americans in society at large.

Carrie created a set of standards that any client who was interested in working with her had to accept. Those standards demanded that her employees be treated with respect, and that they were never given tasks below their dignity. For example, she refused to allow her female employees to scrub the floor. She did not care one whit about losing money, and if a client did not want to follow the rules, she would give them a sound “talking to” and made sure they either fell into line, or they would lose their opportunity to receive placements from Carrie’s employment agency.

Thanks to hard work and the high quality of the service Carrie’s employees provided, as well as her own entrepreneurial attitude, her agency soon became the to-go in the area. As her employment agency developed a certain caché among the elite families of Evanston, it became increasingly unthinkable among her clients not to follow the guidelines of respect she laid down. In this way, both her business and her impact on the community grew rapidly.

Although the concept of “social entrepreneurship” – that is, using your business as a force for social good, in addition to making money – has only recently emerged in the collective consciousness, Carrie Crawford Smith and her business were a century ahead of the times.

Are you a progressive changemaker in need of strategy and encouragement?